Until this morning, one huge, leafy Christmas cactus dominated the table-height red bookcase behind my living room sofa.  Its dark green branches, like dancers choreographed, arched gracefully toward the ceiling and then cascaded toward the bookcase’s tapestry-covered surface, forming a lush, dappled hemisphere.  That plant, really several plants sharing one large pot, always elicited the compliments of visitors – the incarnation of robust, elegant symmetry.

This was the first year that the cactus didn’t flower profusely.  I have always loved paying close attention to this plant’s seasons, monitoring the first appearances of new leaves during the days of long sunlight and watching for the first signs of imminent blooming during the last months of the year.  As was usual in early November, the first few barely perceptible deep pink buds made their appearance at the tips of many of the plant’s shiny green leaves. But, unlike in other years, most shriveled, and only a handful of them grew in size and actually bloomed.  I was chagrined.  Even the ones that became flowers did so very slowly, as if they had managed to beat the odds.  I surmised that even though the plants that composed my much-admired mega-plant appeared to be healthy, they were, in reality, competing for space and nutrients and struggling to thrive.

So I set to work repotting this morning. Newspapers spread on the kitchen floor, a new bag of rich potting soil at the ready, pots of many different sizes nearby, I eased my mega-plant from its familiar pot and teased apart the roots and branches of its component plants, laying each separate plant on its side.   There were losses:  one graceful set of curving branches became completely severed from its clump of roots, and more than a few dark, shiny leaves remained on the newspaper when I lifted each plant to repot it.  Within the hour, though, I had three large Christmas cactus plants, each in its own large pot.  Two of them now sit in decorative ceramic planters atop that same red bookcase; the third is ensconced in a blue wicker basket on the other side of the room. 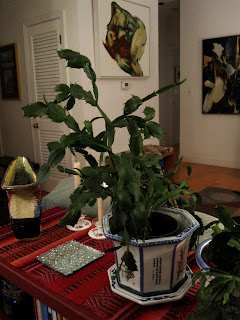 My repotted Christmas cactus plants are far from beautiful.  Not one of them has any grace of form, and one in particular reminds me of a partially plucked wild turkey. Today, they appear as shocked survivors, and I suspect that some of their leaves and branches will lose their will to live, wither, and fall away in the weeks ahead.  Still, I am certain that their traumatic separations and re-establishments will ultimately be for the good.  Bereft and shaken as they are today, these plants have been resettled in moist, ample, hearty earth in pots with plenty of space for their roots to anchor and spread.  I believe there will be flowers next December.  And if not next December, the following December.

As I undertook this repotting project, I realized the metaphorical significance of my actions.  On the surface, I appear to be thriving:  I communicate the exuberance and intensity of those succulent, bountiful leaves.  But I am no longer blooming in my current pot.  It’s time for some personal repotting.  There will be dropped branches and leaves, and for a while, I will exude the same awkward displacement as my newly repotted Christmas cactus plants.  But eventually I will take hold.  And eventually, I’ll flower.

Posted by Joan Soble at 2:41 PM No comments:

So already you're probably wondering why this blog is called "So Already . . .. " That's why.

I will be retiring after thirty-five years as a public school educator in January 2014, and I am always exhilarated -- and sometimes terrified -- by that impending reality.  It's time for some moving forward -- for myself and for education, at the very least. But the future . . . so already, who knows?

I hope that this blog will help me write my way into my own future, especially as I grapple with how much my educator self can, must, and will move with me into that future.

I hope that this blog will give me a space and some company with whom to think about education's future -- what education can, must, and should be as it envisions and shapes the lives of our current and future students and the world which they will inhabit and further shape.

I hope that this blog will provide me with a place to explore and make sense of the experiences and phenomena that, despite their clear and urgent announcement to my consciousness that they have so much more to say to me, I all too often let drift away.

This blog will have three content strands -- hence, the three Christmas cactus flowers above.  I will try to make clear when I'm talking primarily about my future, education, or those other topics that seem important to wrestle with and then write about.

[Many thanks to my friend and colleague Melissa Rivard from whose photograph I screen-shot the blooming flower you see three times above.]
Posted by Joan Soble at 2:23 PM No comments:

This Blog and Me: An Update

I began writing this blog in 2013, near the end of my long career in public education. These days, I read, write, and sing a lot, and am much involved in the lives of my nonagenarian parents. I still think a lot about students and teachers, and teaching and learning. In So Already, I always get to be me.
A photograph taken in Gloucester, Massachusetts--that's my red car at the side--appears at the top of this blog for two reasons. First, it makes me feel at home in the wide, beautiful, sometimes calm, sometimes wild, often mysterious world that sits on all of our doorsteps. Second, it reminds me not to get so comfortable that I forget to venture out into that world.