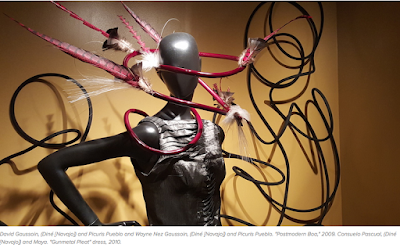 So already, I'm being swallowed by a boa--and think I like it.* I've been digesting "Postmodern Boa" since it first drew me in last Saturday afternoon at the Peabody Essex Museum's Native Fashion Now exhibit.

The Boa Seen
That's it above, courtesy of a photo from mic.com.** Created in 2009 by David Gaussoin and Wayne Nez Gaussoin, Diné [Navajo]/Picuris Pueblo artists, and on loan to the Peabody Essex from the Museum of Indian Arts and Culture, it's constructed (or is it constricted?) out of sterling silver, stainless steel, enamel paint, and feathers.***

The black curling metal (or whatever material that is) you see in the photo--not part of the boa--neither touches nor encircles the mannequin wearing the boa. Rather, placed between the mannequin and the sand-colored wall, it provides a backdrop, a context, for viewing it--or is it her? Effectively, it places the boa in the center of an installation that as a whole prompts interpretation.

Questions of Classification
So is this art or fashion? Is this an object or an installation? And what makes the boa a boa--other than the assertion of the artists who made it? And isn't that the right of the artists who created it--to make that assertion?

In raising all of these questions, I'm justifying the decision made by the exhibit's curators to place "Postmodern Boa" in the exhibit room dedicated to the work of "Provocateurs."**** As a museum press release explains, "Provocateurs depart from conventional fashion to make works that are conceptually driven and experimental."*****

There's no question that the boa itself is a departure from our usual boa expectations. The American Heritage Dictionary provides two definitions for "boa":

1. Any of various large, nonvenomous, chiefly tropical snakes of the family Boidae, which includes the anacondas, the boa constrictor, and other snakes that coil around and asphyxiate their prey.
2. A long fluffy scarf made of soft material, such as fur or feathers.****** 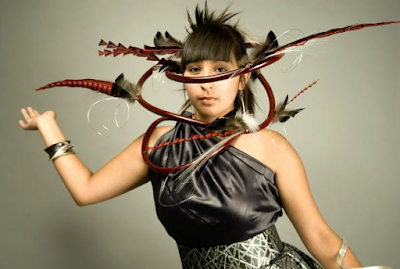 While the Gaussoins' boa, feathery but not soft, is neither venomous nor flexible enough to asphyxiate, it still seems to surround and constrict--especially when worn by a human being rather than a faceless mannequin. The uppermost coil is almost at the wearer's eye level in the adjacent photo.

Questions of Meaning and Message
So whose power is compromised by this, and whose is enhanced? Does that uppermost coil impede the wearer's vision, protect the wearer, transfix the viewer? Does it do all of these? In the photo, the wearer looks above and beyond it, directly at us, confident, self-assured. We're the ones left wondering what it means, what she means.

So given these ambiguities and divergences, "postmodern" seems an apt description of the boa, especially given The American Heritage Dictionary's second definition for it: "Of or relating to an intellectual stance often marked by eclecticism and irony and tending to reject the universal validity of such principles as hierarchy, binary opposition, categorization, and stable identity."*******

Questions of Boundaries
So back to my questions, many of which relate to oppositions and categories that postmodernism might easily dismiss. Fashion vs. art; artifact vs. installation: where are the boundaries? Or is the question irrelevant? Before I would willingly categorize an artifact as "fashion" instead of or in addition to "art," would I need to believe that someone could wear the artifact, function without being totally distracted by the challenge of wearing it, get into a limousine if not into a compact car while wearing it? And what happens to the "humanness" of the human body when it become important as a location or context, when it is employed only in the service of an idea or vision, when it ceases to matter as a person?

A Place for Us and It?
I'm wondering about that place where clothing, fashion, and art all live together. I'm hearing the question Dorothy asks right before she sings "Somewhere Over the Rainbow": "Do you suppose there is such a place, Toto"? 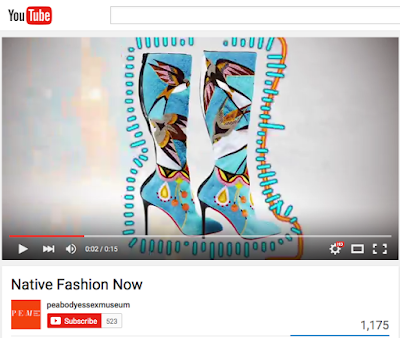 Actually, I think Jamie Okuma's "Boots" create such a place in one of the rooms of Native Fashion Now. Everyone loves them--you can feel people being drawn to them the minute they see them. They're so bright, blue, beautiful, beaded, and birded that no woman********* can resist the fantasy of herself walking, strutting, soaring in them--and then just plain staring them. Isn't that why they occupy a prominent place in the Peabody Essex's Youtube promotional video for the show? Dorothy probably would have traded the ruby slippers for these beaded beauties in a heartbeat!

But wait--now we're talking about exquisite beadwork and design; boots are an old idea. So are we now morphing into the realm of craft, and what's its relationship to fashion? Is all craft art? Is all art fine art?

The Good News
Really, having raised even more questions, important or not, I confess I'm having fun. And I'm feeling excitement and hope.

The truth is that I love "Postmodern Boa," love that it's so beautiful and so strange, suspect that it's not intended for me to wear (though I could be wrong about that), love that it raises so many questions, and love wrestling with those questions.

And I desperately want others to experience it.

From my point of view, it exists in the world, not just to delight and provoke, but to educate--about fashion, about culture, about people, about past and present. It's the teacher in me that loves that it challenges us to try to understand who we are and among whom we live.

People still need to be educated, as some responses to Native American fashion prove. "'The amounts of emails and letters I still get from around the world is insane, just because people are like, "Wow, I didn't even know... Native Americans, they still even exist,"' Patricia Michaels, a Native American designer from Taos Pueblo, New Mexico, told Mic."**********  Michaels goes on to explain, "'A lot of the garments you see here are built upon new life, new generations, new material. We've always been evolving. We've always been moving forward. In that, you can't erase that kind of energy.'"

Not only are we not dead and gone, Michaels is saying, but we're really alive--creating, evolving, acknowledging and celebrating continuities but not feeling overly bound by them, harnessing the energy and possibilities inherent in our traditions, and creating new energy, new visions, new works, new ways, new traditions to be borrowed on and revised in the future.

Leave it to art to challenge us, to invite us to consider revisions and new visions***********, to confront us in ways that entice us to pay attention, engage, and wonder whether than to hide or exit in a huff. The hope I feel is about people, artists, and art--and the really good museums that bring them together with intent and respect.

Native Fashion Now will be on view at the Peabody Essex through March 6: so if you're local and haven't yet visited, there's still time. Let me know what you think!

This Blog and Me: An Update

I began writing this blog in 2013, near the end of my long career in public education. These days, I read, write, and sing a lot, and am much involved in the lives of my nonagenarian parents. I still think a lot about students and teachers, and teaching and learning. In So Already, I always get to be me.
A photograph taken in Gloucester, Massachusetts--that's my red car at the side--appears at the top of this blog for two reasons. First, it makes me feel at home in the wide, beautiful, sometimes calm, sometimes wild, often mysterious world that sits on all of our doorsteps. Second, it reminds me not to get so comfortable that I forget to venture out into that world.